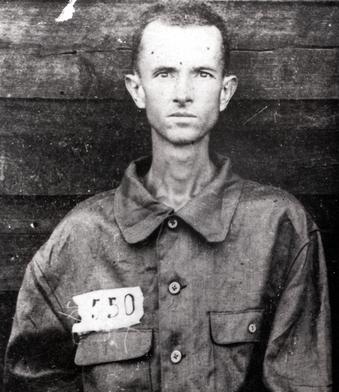 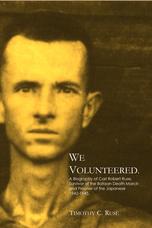 ​We Volunteered.  ​​The WWII POW Biography of Carl Robert Ruse

It was November of 1941 when the USS President Coolidge arrived at Pier Seven in Manila.  The 21st Pursuit Squadron’s pilots and ground crew disembarked and headed for nearby Nichols Field just as American diplomatic efforts with Japan fell apart.  Only seventeen days before the surprise attacks on Pearl Harbor, Carl Ruse arrived at the primitive airfield with no hangars to work in, and with airplanes still in crates.

After being attacked and strafed by the Japanese on December 8th, 1941, the men would soon take on a new role as defenders of Bataan with dwindling resources, and no reinforcements.  The pilots and ground crew were no longer air crews; they were now known as FLYING INFANTRY.  The Defenders of Bataan fought until their resources had been long depleted, surviving by eating anything from iguanas to the horses and mules of the 26th Cavalry.  When adequate means of defense were exhausted, the men were finally surrendered in April of 1942.

After surrender, Ruse walked the grueling length of the infamous Bataan Death March, surviving daily atrocity and watching fellow prisoners be killed along the way.  Ruse would survive life as a POW at Camp O’Donnell, Cabanatuan, and Davao Penal Colony, as well as spending weeks in the hold of a Japanese “Hellship” that transported him from the Southern Philippine island of Mindanao to Japan where brutal treatment of prisoners by their captors continued.

It was at Davao where ten men, including the 21st Pursuit Squadron’s leader, Ed Dyess, escaped into the thick swamps and jungle surrounding the camp.  Prior to their escape, each man had been placed in a “shooting squad” with ten other men as a deterrent to escape.  The purpose had been made clear; if any man in your shooting squad escaped, the other ten would be killed.  Left behind at Davao, Ruse found himself on trial for the escape of others.  Despite this, he was glad for his friends to be free of the horrible place.

Ruse later found himself on another Japanese hellship; this time bound for Japan.  In what ended up being a three-month journey in the hold of a filthy and crowded ship, Ruse finally arrived at Yokkaichi Japan where he would remain until the end of the war, weighing only eighty pounds upon his liberation.

Ruse survived the ordeal and lived to tell a story in which each page describes events during which death may have been as likely an outcome as life.  It is a story of grit, survival, and responsibility that should not be forgotten or taken for granted.